Family members saluted were Randal Cardarelle; his daughter, Samantha; his son, Vince; and his daughter-in-law, Alyssa, all of whom are veterans or are currently serving in the military.

Randal, who has been a Packers season ticket holder for 30 years, served in the Air Force for four years, working as a B-52 mechanic and achieving the rank of senior airman. A West Bend, Wis., native, Randal followed in the footsteps of his father, who served in the Korean War in the Marine Corps and earned a Purple Heart.

Samantha, who currently lives in South Milwaukee, Wis., is an E-3 Airman First Class, serving as an in-flight refueler for the Wisconsin Air National Guard.

Vince, who along with Samantha grew up in Saukville, Wis., served in the Air Force for six years, and deployed overseas to the Middle East as an air traffic controller in 2017. He now lives in Colgate, Wis.

Alyssa served in the Air Force for six years, working as an in-flight medic and EMT, and was deployed as part of a humanitarian mission in Central America. She was named Airman of the Year in 2013, and Flight Medicine Technician of the Year in 2014. Alyssa is a Lewiston, Idaho, native who now lives in Colgate.

Operation Fan Mail, which debuted in 2007, is designed to honor families with a member who is on active duty, or a member who is a veteran. The family member can be a spouse, mother, father, son, daughter or sibling. The Packers and WPS Health Solutions hosted a family or group at each 2019 home game and recognized them on the field during pregame activities. A total of 129 individuals, families or groups have been recognized through the program thus far.

To choose families, the Packers and WPS Health Solutions are asking interested families, or friends of eligible families, to submit an essay, 500 words or less, on why a particular fan should be saluted next season. Essays can be sent to:

In addition to being recognized on-field prior to the game, selected families will receive four tickets to the game and a $150 Packers Pro Shop gift card courtesy of WPS Health Solutions. 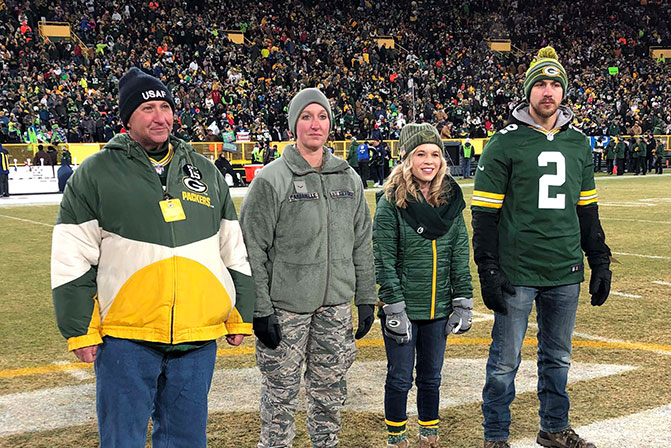