MADISON, Wis.—Jan. 21, 2022—The Green Bay Packers and WPS Health Solutions are paying special tribute this week to Chief Warrant Officer 2 Trevor Klock in conjunction with the Jan. 22 game against San Francisco. Operation Fan Mail, the program that recognizes military families and veterans at each Packers home game, marks its 15th season in 2021.

Klock is originally from Sun Prairie, Wis., and served in the Army Reserve from 2004–2007, was active-duty Army from 2007–2010, and has served in the Army National Guard since 2014. In the Reserve, he was stationed at Fort Sheridan, Ill., and worked as a cargo specialist. Wanting to deploy, he changed to active-duty status and reclassed as an infantryman and went to Fort Hood, Texas. From there, Klock was deployed to Afghanistan as a scout sniper team leader. He completed his Army service in 2010, but found he missed the military. So, he joined the Wisconsin Army National Guard in 2014 and moved his family to Alabama so he could attend flight school. They returned to Wisconsin in 2017, and Klock now pilots a Black Hawk helicopter in an aviation unit based in Madison, Wis.

As the honorees for Operation Fan Mail this week, the Klock family will receive four tickets to the game and a $150 Packers Pro Shop gift card, courtesy of WPS Health Solutions.

The program, which debuted in 2007, is designed to honor families with a member who is on active duty, or a member who is a veteran. The Packers and WPS Health Solutions will host a family at each 2021–22 season home game and recognize the members on the video boards during pregame activities. A total of 147 individuals, families, or groups have been recognized through the program since it began. 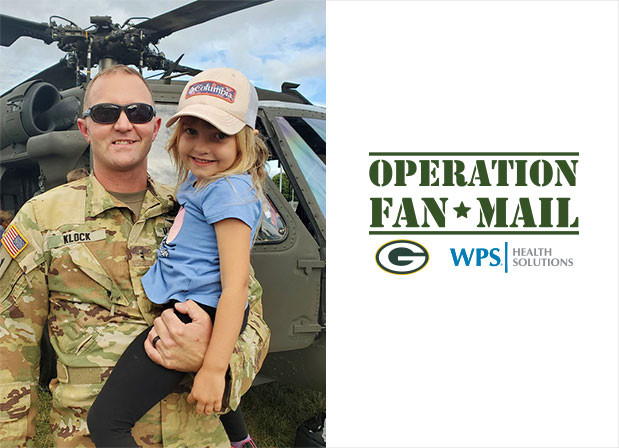