GREEN BAY, Wis.—Aug. 24, 2021—The Green Bay Packers and WPS Health Solutions paid special tribute this week to U.S. Army veteran Douglas Wirth and his family in conjunction with Saturday’s preseason game against the New York Jets. Operation Fan Mail, sponsored by WPS, is the program that recognizes military families and veterans at each Packers home game. The program marks its 15th season in 2021.

Wirth, a native of Ridgeland, Wis., served in the Army from 1967–69. He was deployed to Vietnam in 1968 as part of the 9th Infantry Division in the 43rd Scout Dog Platoon. He served as a dog handler, and his job was to take a squad of eight to 10 soldiers to ambush sites safely, securing their perimeter with his dog, a German Shephard named Alex. They kept the group from tripping booby traps and ensured the bases and bridges were secure.

Wirth earned the rank of Sergeant, and during his time in the military, he was awarded the Combat Infantry Badge in October 1968 and a Purple Heart in April 1969.

Wirth, who has been a Packers fan since he was 12 years old, comes from a military family; his father served during World War II and his nephew served recently in the U.S. Air Force. He is looking forward to being honored on the Freedom Honor Flight in October. He was nominated for Operation Fan Mail by his sister, Julie Sanders, and was accompanied at Saturday’s game by his fiancée, Lana.

As the honoree for Operation Fan Mail this week, the Wirth family also received four tickets to the game and a $150 Packers Pro Shop gift card, courtesy of WPS.

The program, which debuted in 2007, is designed to honor families with a member who is on active duty, or a member who is a veteran. The Packers and WPS Health Solutions will host a family at each 2021 home game and recognize the members on the video boards during pregame activities. A total of 138 individuals, families, or groups have been recognized through the program. 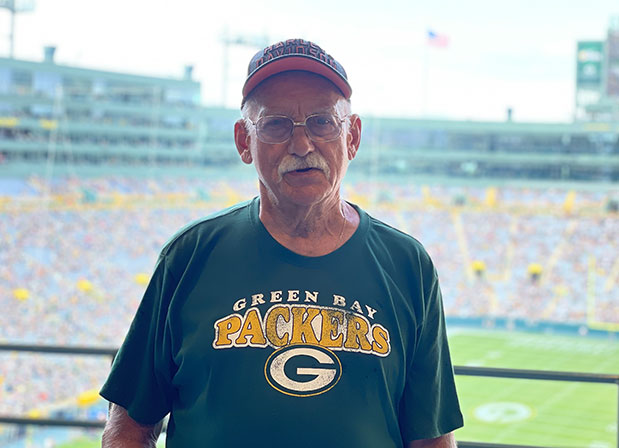