MADISON, Wis.—Sept. 22, 2021—The Green Bay Packers and WPS Health Solutions paid special tribute this week to Navy veteran Ruth Schmelzer Potier and her family in conjunction with the Sept. 20 game against Detroit. Operation Fan Mail, the program that recognizes military families and veterans at each Packers home game, marks its 15th season in 2021.

Potier, of Sturgeon Bay, was the first Door County woman to enlist in the Navy in January of 1943. She was sworn into the WAVES (Women Accepted for Volunteer Emergency Service) as part of the second regiment nationwide after being inspired by three brothers who were already serving in World War II. At that time, enlistment was for the duration of the war.

After graduating at the top of her class from basic training, she worked in the Disbursing Office at the Naval Air Technical Training Center in Millington, Tennessee. Upon earning the rank of Storekeeper 2nd Class, she transferred to the Travel Office where she arranged routes for sailors being shipped out by rail. During her time in the military, she participated in marching drills, including the privilege of marching in a New York City parade in front of Mayor LaGuardia.

She eventually began corresponding with a hometown boy, Leonard Potier, who was also in the Navy and had been stationed on the ship USS Argonne at Pearl Harbor when the base came under attack. While home on leave, the two were married on Jan. 11, 1945, and went on to raise a family of six children.

Potier then worked as a nursing assistant at the Door County Memorial Hospital for 14 years. She is 99 years old and, with the help of her children, still lives in her own home, where she remains a loyal Packers fan.

As the honoree for Operation Fan Mail this week, the Potier family received four tickets to the game and a $150 Packers Pro Shop gift card, courtesy of WPS.

The program, which debuted in 2007, is designed to honor families with a member who is on active duty, or a member who is a veteran. The Packers and WPS Health Solutions will host a family at each 2021 home game and recognize the members on the video boards during pregame activities. A total of 139 individuals, families, or groups have been recognized through the program since it began.

Essays can also be submitted online at Operation Fan Mail or sent to: 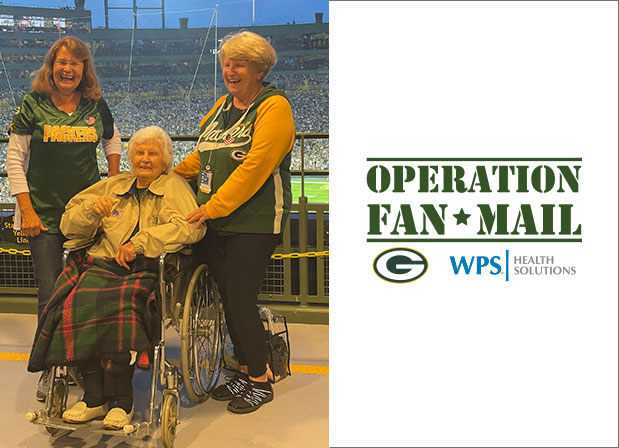