GREEN BAY, Wis.—Sept. 22, 2020—The Green Bay Packers and WPS Health Solutions paid special tribute this week to Army veteran Terry Hetrick and his family in conjunction with the Sept. 20 game against the Detroit Lions.

Operation Fan Mail, the program that recognizes military families and veterans at each Packers home game, will continue virtually this season as the program marks its 14th season in 2020.

Hetrick is originally from Tomahawk, Wis., and served in the Army from 1983 to 2017. At the time of his retirement, he was the most senior maintenance warrant officer in the Army. During his military career, he spent 28 months in combat and trained the Iraqi and Afghan armies to maintain donated equipment as part of the NATO Training Mission. He also conducted peacekeeping missions in Bosnia and Honduras, defended the Fulda Gap in Germany and DMZ in Korea, and served as an adviser to the Army Chief of Staff.

Hetrick’s family includes his wife, Cheryl; three grown children, Shawn, Ryan, and Raegan; daughters-in-law Miranda and Amy; grandchildren Layla, Lucy, Mason, and Melody; and future son-in-law Erik. Hetrick and his family live in Indianola, Iowa, where they love spending time together on their farm with their many animals.

As the honoree for Operation Fan Mail this week, the Hetrick family will also receive a $250 prize pack from WPS Health Solutions and the Packers.

A total of 129 families have been saluted during the past 12 seasons. The Packers and WPS Health Solutions are still inviting interested families, or friends of eligible families, to submit an essay, 500 words or less, on why a particular family should be saluted this year. Families intended for recognition are those that have a member serving on active duty, or a member who is a veteran. The family member can be a spouse, mother, father, son, daughter or sibling. 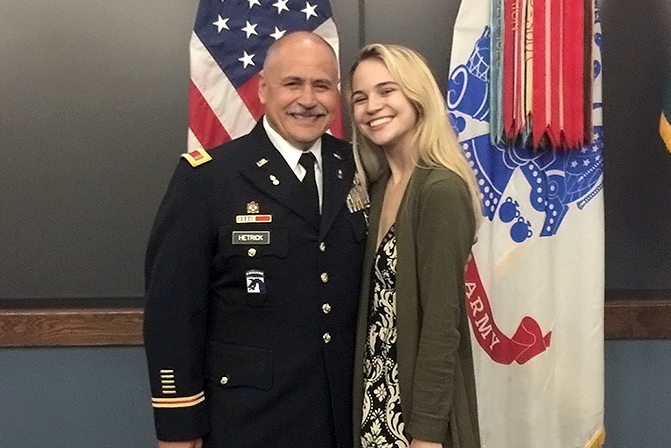 Terry Hetrick and his daughter, Raegan