GREEN BAY, Wis.—Oct. 4, 2021—The Green Bay Packers and WPS Health Solutions paid special tribute this week to Army veteran Eric Bebee and his family in conjunction with the Oct. 3 game against Pittsburgh. Operation Fan Mail, the program that recognizes military families and veterans at each Packers home game, marks its 15th season in 2021.

Bebee, originally from Birchwood, Wis., enlisted in the U.S. Army after seeing news coverage of the 9/11 attacks 20 years ago. At the beginning of his military career, he was in the infantry, serving as a rifleman, machine gunner, and Fire Team Leader. He finished his Army career as an Information Technology Specialist, helping troubleshoot computer and network issues, operating and maintaining radios, and facilitating battalion communications.

During his time in the Army, he traveled all over the world. He was stationed from 2003–11 in Germany, deploying from there to Afghanistan three times. He was then stationed at Fort Hood in Texas, from where he deployed to Afghanistan once more, as well as Liberia, Africa, in 2014 as the Lead Information Technology Specialist in support of Operation United Assistance to assist with the Ebola Outbreak Crisis.

In 2016, Bebee transitioned from active duty to the Iowa Air National Guard, and he and his family now live in Hornick, Iowa. He works full-time as a cyber security manager at the 185th Air Refueling Wing in Sioux City, Iowa, as a Department of Defense civilian during the week. He serves as a traditional Air Guardsman on drill weekends. During his time in the military, he has received five Army commendation medals, three Army achievement medals, the Combat Infantry Badge, and an Iowa Air Guard Commendation medal.

Bebee met his wife, Patricia, while stationed in Germany, and their family includes their daughter, Suriana, and their son, Wyatt. After Patricia became a U.S. citizen in 2018, she also enlisted into the Iowa Air National Guard to serve her country.

As the honoree for Operation Fan Mail this week, the Bebee family also received four tickets to the game, courtesy of WPS, and a $150 Packers Pro Shop gift card.

The program, which debuted in 2007, is designed to honor families with a member who is on active duty, or a member who is a veteran. The Packers and WPS Health Solutions will host a family at each 2021 home game and recognize the members on the video boards during pregame activities. A total of 140 individuals, families, or groups have been recognized through the program since it began. 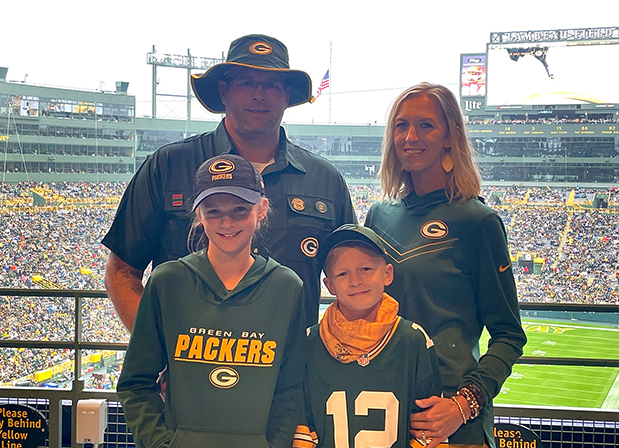