Operation Fan Mail, the program that recognizes military families and veterans at each Packers home game, will continue virtually to honor those who serve the country as the program marks its 14th season in 2020.

Wright, who is originally from the Jefferson, Wis., area, has been serving in the U.S. Marine Corps for 17 years. He has deployed overseas five times, twice in support of Operation Iraqi Freedom and once in support of Operation Enduring Freedom, during which he served as a team leader, squad leader, and combined anti-armor team section leader. He has also served in Italy and on naval vessels in the Mediterranean Sea and Persian Gulf. During his first 12 years in the military, he was an infantry machine gunner, and in the last five years, he has been an infantry unit leader.

Wright is also a dedicated volunteer, serving as a volunteer firefighter while living in North Carolina and coaching his son’s youth football and baseball teams. The family now lives in San Clemente, Calif., where Wright volunteers with the high school football program and is involved with the Rotary Club on base. During his time in the military, Wright has earned numerous awards and honors, including the Navy and Marine Corps Achievement Medals, one with a combat distinguishing device. He’s also been recognized with, among other awards, a Humanitarian Aid Medal, the Naval Sea Service Deployment Ribbon with four bronze stars, and the Outstanding Volunteer Service Medal.

Wright’s family includes his wife, Christine, and their children Bryan, Isabella, and Olivia. Wright says he is the man he is today because of his parents, Alan and Julie Wright, and he thanks the entire Wright and Uttech families and his uncles: Frank, Elmer, George and Charles Wright, and Mark Uttech.

Wright would also like to honor his best friend from his days as a young Marine, Scott Zubowski, who was killed by a roadside improvised explosive device in November 2005. The two went through infantry training together in 2003 before deploying to Iraq in 2004 and 2005. Wright served as best man in Scott’s wedding to his wife, Klancey, in 2004. Wright says he thinks about Scott every day and continues to serve in honor of women and men like Scott who made the ultimate sacrifice.

As the honoree for Operation Fan Mail this week, the Wright family will also receive a $250 prize pack from WPS Health Solutions and the Packers. A total of 130 families have been saluted during the past 12 seasons. The Packers and WPS Health Solutions are still inviting interested families, or friends of eligible families, to submit an essay, 500 words or less, on why a particular family should be saluted this year. Families intended for recognition are those that have a member serving on active duty, or a member who is a veteran. The family member can be a spouse, mother, father, son, daughter, or sibling.

Essays can be sent to: 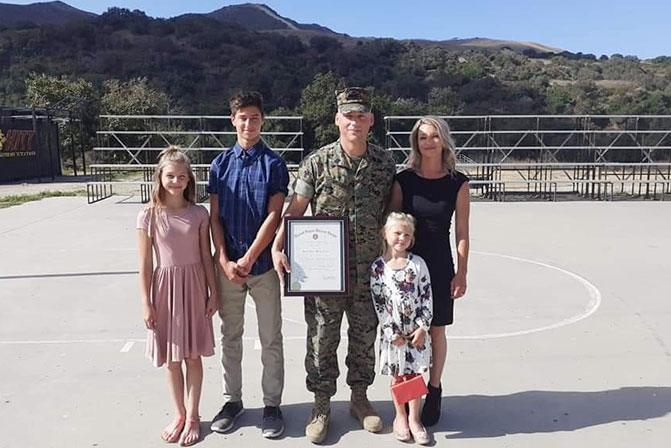