MADISON, Wis.—Oct. 25, 2021—The Green Bay Packers and WPS Health Solutions paid special tribute this week to Navy veterans Omar and Laura Azmitia in conjunction with the Oct. 24 game against Washington. Operation Fan Mail, the program that recognizes military families and veterans at each Packers home game, marks its 15th season in 2021.

Omar and Laura have served a combined 49 years of military service in the U.S. Navy. Both served as Hospital Corpsmen, taking care of countless service men and women who were injured while serving. Laura, a native of Georgia, enlisted in October 1993 and eventually achieved the rank of Chief Petty Officer. She deployed in support of Operation Enduring Freedom aboard various naval vessels, and she retired after 22 years of service in March 2016.

Omar, who moved to the United States from Guatemala when he was a child, enlisted in August 1994. He achieved the rank of Master Chief Petty Officer and was deployed to Iraq during Operation Iraqi Freedom. He was involved in combat operations during the height of the insurgency in Fallujah, and was deployed in Iraq and Afghanistan in 2005, 2007, and 2008. After serving 27 years, he just celebrated his retirement ceremony on Oct. 15.

The couple met in late 2002 while both were stationed in San Diego. Omar had become a Packers fan as a teenager, after researching American football as a newcomer to the U.S. and discovering the history surrounding the Packers. After he met Laura, she became a fan as well, and they’ve passed their love of the team on to their children. They now live in Pensacola, Fla., with their two daughters and one son.

As the honorees for Operation Fan Mail this week, the Azmitia family also received four tickets to the game and a $150 Packers Pro Shop gift card, courtesy of WPS.

The program, which debuted in 2007, is designed to honor families with a member who is on active duty, or a member who is a veteran. The Packers and WPS Health Solutions will host a family at each 2021 home game and recognize the members on the video boards during pregame activities. A total of 141 individuals, families, or groups have been recognized through the program since it began. 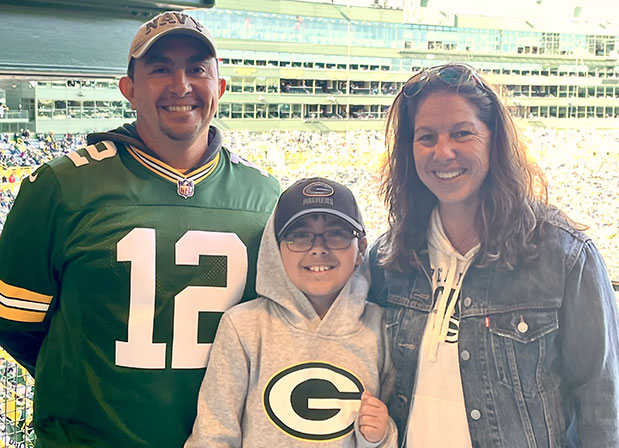