GREEN BAY, Wis.—Nov. 2, 2020—The Green Bay Packers and WPS Health Solutions paid special tribute this week to U.S. Army and Air Force veteran Glenn Allen Smith and his family in conjunction with the Nov. 1 game against the Minnesota Vikings.

Operation Fan Mail, the program that recognizes military families and veterans at each Packers home game, will continue virtually to honor those who serve the country as the program marks its 14th season in 2020.

Smith, a native of Duncan, Okla., entered the Air Force in June 1960, immediately after graduating from Comanche High School, despite being only 17. He served in Vietnam for an 18-month tour from 1966-67, and in October 1968, he joined the Army, returning to Vietnam for another tour from 1970-72. He retired from active duty in October 1980 and began a 37-year career in the civil service in a variety of departments.

After 9/11, Smith vowed to deploy to the Middle East to defend his country, and though he could not enlist again, he changed jobs within the U.S. Department of the Army so he could deploy as a civilian. In 2006, he deployed to Iraq to serve as a communications-electronics command logistics assistant representative, where his responsibilities included ensuring that all radars were operational. Over the next six years, he deployed to Iraq five more times and to Afghanistan twice, where he spent his 70th birthday.

Smith retired from service in March 2017. A devoted patriot and proud veteran, he spent his entire 57-year career honorably serving as a soldier and a civil servant, motivated by love of his country.

Smith became a Packers fan because of his wife, Tracy, a lifelong Green Bay fan. They live in Duncan, Okla., on the same land where Smith grew up. Their family includes two grown daughters, Jennifer and Shauna, and grandkids Alexa, Greggory, Caleb, Katelynn, and Morgan.

As the honoree for Operation Fan Mail this week, the family will also receive a $250 prize pack from WPS Health Solutions and the Packers. A total of 131 families have been saluted during the past 12 seasons. The Packers and WPS Health Solutions are still inviting interested families, or friends of eligible families, to submit an essay, 500 words or less, on why a particular family should be saluted this year. Families intended for recognition are those that have a member serving on active duty, or a member who is a veteran. The family member can be a spouse, mother, father, son, daughter, or sibling. 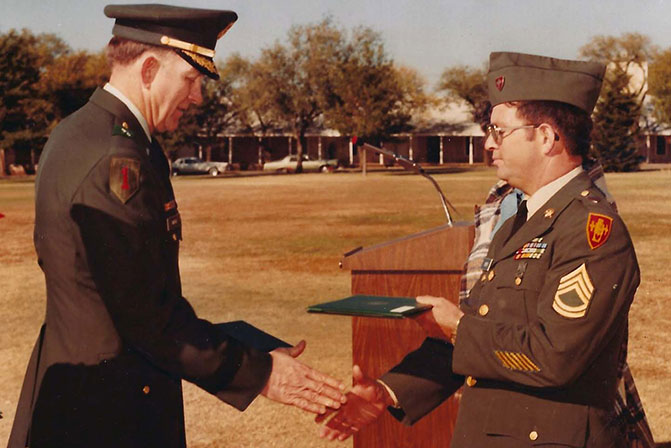