MADISON, Wis.—Nov. 15, 2021—The Green Bay Packers and WPS Health Solutions paid special tribute this week to Army veteran Gauge Hunter and his family in conjunction with the Nov. 14 game against Seattle. Operation Fan Mail, the program that recognizes military families and veterans at each Packers home game, marks its 15th season in 2021.

Hunter, who was born in California but spent much of his childhood in Michigan, joined the U.S. Army in 2012 to serve his country. After basic training at Fort Leonard Wood in Missouri, he received orders to the 23rd Engineer Company (Sappers) in Fort Richardson, Alaska. After a year of active duty, he was deployed to the east region of Afghanistan, where his unit did route clearance missions.

Five months into deployment, his truck was hit with a roadside bomb while on mission and he was injured. Following the deployment, he was medically retired.

After his retirement from the service, Hunter, a lifelong Packers fan, decided to make Wisconsin his home. He and his wife, Alli, moved to Oshkosh, where they have lived for five years. They attended Sunday’s game with Hunter’s sister, Lindsey, and his brother-in-law, Fred.

As the honorees for Operation Fan Mail this week, the Hunter family also received four tickets to the game and a $150 Packers Pro Shop gift card, courtesy of WPS.

The program, which debuted in 2007, is designed to honor families with a member who is on active duty, or a member who is a veteran. The Packers and WPS Health Solutions will host a family at each 2021 home game and recognize the members on the video boards during pregame activities. A total of 142 individuals, families, or groups have been recognized through the program since it began.

Essays can be submitted online at operationfanmail.com or sent to: 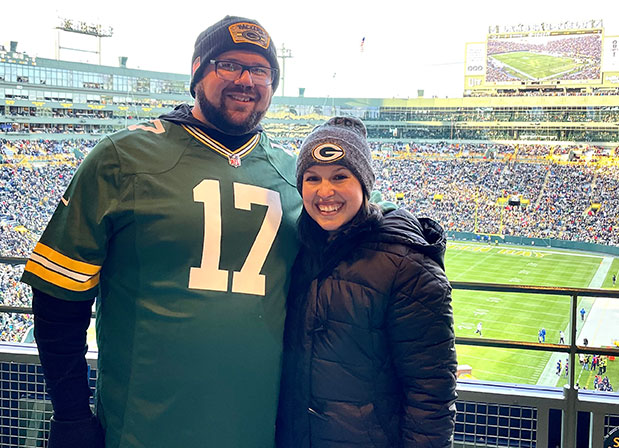