GREEN BAY, Wis.—Dec. 1, 2020—The Green Bay Packers and WPS Health Solutions paid special tribute this week to Air Force Captain Crystal Staszak and her family in conjunction with the Nov. 29 game against the Chicago Bears.

Staszak, a native of Oak Creek, Wis., felt moved to serve her country when she saw the events of 9/11 on television when she was in third grade. She enlisted in 2011, eventually graduating from the prestigious and selective U.S. Air Force Academy, and was accepted into pilot training. She has been serving for nine years, including her time at the Academy, and now pilots an RC-135 surveillance plane. She is currently stationed at Offutt Air Force Base in Nebraska but is regularly deployed to classified locations around the world, where she often encounters hostile aircraft.

During her service, Staszak has received many awards, including the Global War on Terrorism Service Medal and the Nuclear Deterrence Operations Service Medal. Aside from serving the nation as a member of the military, Staszak also gives back to the community by volunteering with Big Brothers Big Sisters and as a Scout camp counselor.

Staszak’s family includes her parents, David and Yong, her sister Amber, as well as Amber’s husband and their three children.

As the honoree for Operation Fan Mail this week, the family will also receive a $250 prize pack from WPS Health Solutions and the Packers. A total of 133 families have been saluted during the past 12 seasons. The Packers and WPS Health Solutions are still inviting interested families, or friends of eligible families, to submit an essay, 500 words or less, on why a particular family should be saluted this year. Families intended for recognition are those that have a member serving on active duty, or a member who is a veteran. The family member can be a spouse, mother, father, son, daughter, or sibling. 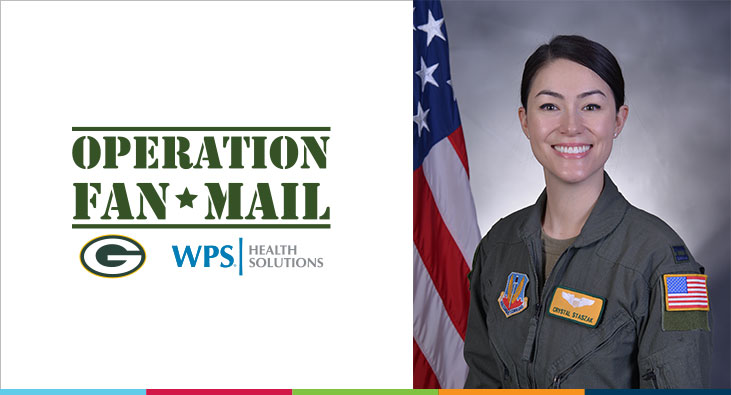