MADISON, Wis.—Dec. 13, 2021—The Green Bay Packers and WPS Health Solutions paid special tribute this week to Army veteran Timothy Rospert in conjunction with the Dec. 12 game against Chicago. Operation Fan Mail, the program that recognizes military families and veterans at each Packers home game, marks its 15th season in 2021.

Rospert, who was born and raised in Toledo, Ohio, enlisted in the U.S. Army in 2004. Prior to his military career, he worked in construction and assisted with building several homes for Habitat for Humanity. Always eager to help his community, he furthered his commitment to service when he joined the U.S. Army.

He spent the bulk of his career in combat operations, achieving the rank of Sergeant. He was deployed to combat three times: first to Iraq for 15 months from 2006–07, then to Afghanistan twice, once for 12 months from 2009–10 and again for nine months in 2011–12.

During his final deployment, he had to be medically evacuated due to injuries he sustained in the line of duty. He was flown to Germany, then to Georgia, where he underwent back surgery and subsequently retired from the military in 2013.

Rospert, who became a Packers fan as a child, now lives with his family in Johns Island, South Carolina. He enjoys watching the Packers with his daughter, Hailey, who was born just as Rospert was returning from Iraq. Though Rospert missed out on several milestones during Hailey’s early life, the two have bonded over the Packers and attended Sunday’s game together. Their family also includes Rospert’s wife, Ashley, daughter, Alyssa, and Rospert’s stepson, Caleb O’Dell, who is in the U.S. Navy and is stationed at Pearl Harbor.

As the honorees for Operation Fan Mail this week, the Rospert family also received four tickets to the game and a $150 Packers Pro Shop gift card, courtesy of WPS.

The program, which debuted in 2007, is designed to honor families with a member who is on active duty, or a member who is a veteran. The Packers and WPS Health Solutions will host a family at each 2021 home game and recognize the members on the video boards during pregame activities. A total of 144 individuals, families, or groups have been recognized through the program since it began.

Essays can be submitted online at operationfanmail.com or can be sent to: 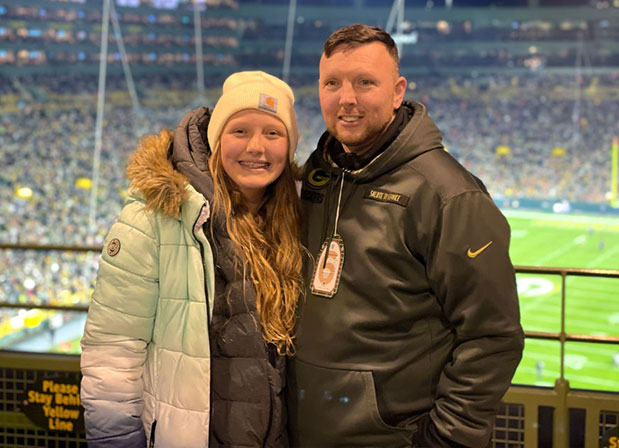